After a record-setting month in March and a equally nice April, I knew May was going to be a slow month. I had barely crossed the $100 mark in February.

I got my first dividend from AT&T this month. I also got dividend from Google which is a one-time event I think. This is due to the terms of the split that Google did with it stock last year.

Here are some charts looking at dividend growth over the years 🙂

The below chart shows May dividends over the years. Looking forward to seeing this chart go higher and higher. 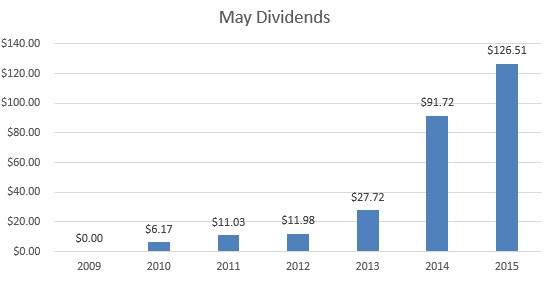 The below chart shows the dividends that I have received until May each year. By May last year, I had received $512.20 and it has grown to $978.43 this year.

The below chart represents the total annual dividends. Looking at the numbers below, I have received little over 61% of my entire 2014 dividends in just 5 months in 2015. That’s really impressive.

With May dividends of $126.51, I have received 39.14% of my 2015 target of $2,500.00. As of now, I am on pace to meet the goal and with increased dividends due to dividend increases and new investments, I will be meeting this goal earlier that the end of the year. I will be reviewing the goals mid-year to see if it needs to be revised.

The dividends page will be updated to reflect the May dividends.

Disclosure: Long on all stocks mentioned above.

I am NOT a professional investment adviser nor I am qualified to make investment suggestions. The information presented on this site are solely my opinions and are NOT to be treated as investment advice.

Investing in stock market is risky and might lead to loss of capital up to 100% of the invested capital.